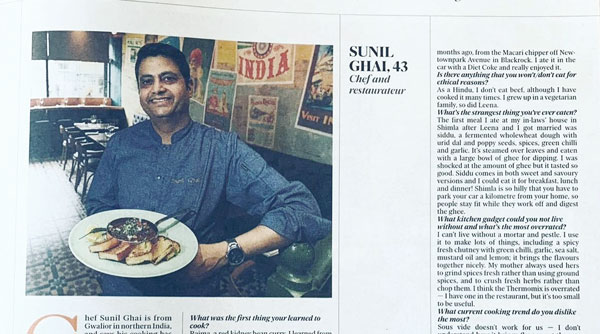 I've fallen out of love with my usual Indian takeaway. The relationship got off to an enthusiastic start but has petered out, thanks to an unforgivable combination of rising prices and dwindling standards. By the time I called it quits, the prawn curries were all sauce and no crustacean, and the biryanis light on everything bar the rice. The end came when a lamb version costing north of €15 came with just three - yes, I counted them - modest cubes of meat.

But spending hours immersed in (and, let's be frank, trying to get my head around the science of) Nik Sharma's latest cookbook, The Flavour Equation, has me craving Indian food. Sharma, a molecular biologist by profession, emigrated from Mumbai to the US many years ago, and while his recipes are brilliantly diverse and cross-cultural, the spicing of India wafts through his writing.

Sunil Ghai has been at the forefront of Indian food in Ireland for many years now - first as chef with the Jaipur group, then at Ananda, and more recently at his own restaurants, Pickle on Dublin's Camden Street and Tiffin in Greystones. From Gwalior in northern India, Sunil trained at the best hotels in his home country before being headhunted to Ireland. I know him to be a stickler for quality. A few years ago when my family and I got stuck in Mumbai on an unexpected layover, he put together a list of places for us to eat that was bang on.

Sunil signed the lease on his new premises in Clonskeagh last autumn, but with one thing and another - ha! - didn't get around to opening until August. In the future there will be tables, but for now it's for takeaway and local delivery. You can pre-order online for designated click-and-collect slots, but I know from social media posts that Street sells out most days, so I chance my arm ordering over the phone and get the man himself on the other end of the line. Not what I was expecting.

Anyway, I don't know if he is doing me a favour but he lets me place an order. And it is a long one. "It's the whole menu, ma'am," he says (is he judging me?) and I blush as I mutter something about there being six of us and how we like to have leftovers. Not simply that we're a greedy bunch, perish the thought.

We run through a gamut of dishes from light and crunchy Gwalior kale, onion and potato fritters dusted in (I think) gram flour to autumnal samosas filled with minced venison accompanied by a subtle berry chutney. There are meaty tandoori lamb cutlets marinated in onion and bay with the merest touch of Kashmiri chilli, and a gentle Goan prawn curry (with at least a dozen prawns; I counted them) flavoured with coconut and turmeric, mild enough for the heat-averse. Memsahib's Rara Gosht, on the other hand, made with diced and hand-pounded lamb, slow-braised with clarified butter and kalpasi (black stone flower, a type of lichen used as a spice), packs plenty of heat, and there's an abundance of lamb in a fragrant Hyderabadi Charminar biryani.

Farmer's butter chicken is the version Sunil learned in the Sheraton in Delhi (I ate it there on my honeymoon) and has been cooking ever since. Fiery gunpowder spiced potatoes is another one for the heat merchants, while tadka saag - made to Sunil's mother's recipe - is subtle and soothing. Roasted cauliflower is flavoured with turmeric and ginger, and the raita includes pomegranate in addition to the customary cucumber and mint. There are ruby pickled onions, little pots of Sunil's signature pickles, and pillowy naan breads - some filled with garlic, onion and coriander, others with almond. But having given over two days of my summer to attempting the Dishoom version, the rich 36-hour black dal - lentils, fenugreek, tomatoes, cream - is the dish I appreciate the most.

It is, I have to admit, a ridiculous amount of food. The bill comes to €151.50. We get six dinners and four lunches out of it and, as I write, there is still a little pot of that sublime dal calling to me from the fridge downstairs.

The €14.50 Tasty Street Kebab Box contains a lamb chop, chicken tikka and crisp prawns from the tandoor, plus a samosa and dips.

A feast for two will cost in the region of €60.

Restaurant rigour on a takeaway menu.

The delivery range is 5km. 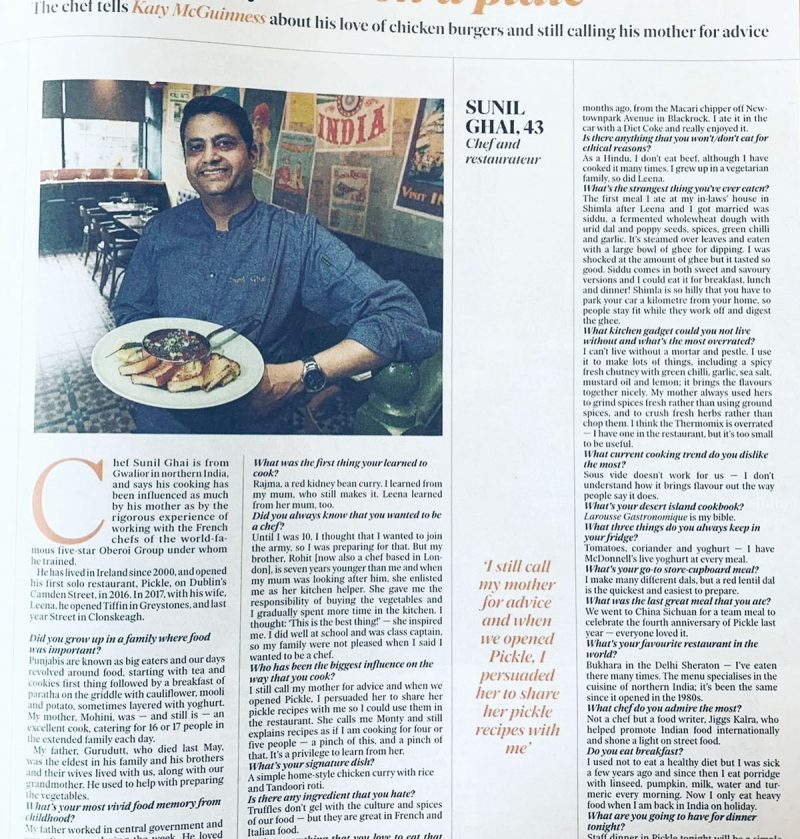